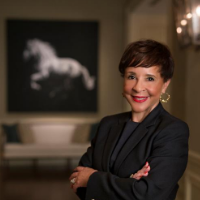 Sheila C. Johnson is Founder and CEO of Salamander Hotels & Resorts (SHR), which operates a collection of properties along the east coast and in the Caribbean. SHR includes the equestrian-inspired Salamander Resort & Spa in Middleburg, Virginia, which has been awarded the distinguished Forbes Five Star rating. The collection also features Innisbrook in Tampa Bay, which is home of the annual PGA Valspar Championship; The Henderson, a luxury beach resort in Destin, Florida; the spectacular Hotel Bennett in Charleston, South Carolina; and
Half Moon in Montego Bay, Jamaica, which is opening a new resort experience called Eclipse this fall, 2020.

As Vice Chairman of Monumental Sports & Entertainment, Ms. Johnson is the only African-American woman to have ownership in three professional sports teams: the NBA’s Washington Wizards, the NHL’s Washington Capitals (2018 Stanley Cup Champions), and the WNBA’s 2019 World Champions Washington Mystics, for which she serves as President and Managing Partner.

In 2017, Ms. Johnson was named on Forbes Magazine’s Top 50 America’s Richest Self-Made Women. In 2016, she co-founded WE Capital, a venture capital consortium to support and invest in female-led enterprises with a goal of promoting social impact and generating financial returns. She also served on the board of the Greater Washington Partnership, which seeks to strengthen the region’s global position as a center for commerce and innovation.

Ms. Johnson has long been a powerful influence in the entertainment industry, starting with her work as founding partner of Black Entertainment Television. She has served as executive producer of documentary and feature films, including The Butler, directed by Lee Daniels. Ms. Johnson is founder and chair of the Middleburg Film Festival, an annual celebration of independent films. The festival is dubbed by the Washington Post as “an itty-bitty Cannes…” and referred to by RogerEbert.com as “…the place to be during Oscar season”. It continues to attract Oscar worthy films such as Greenbook, La La Land and 2019’s Oscar winner Parasite.

In 2006 Ms. Johnson was named global ambassador for CARE, a leading humanitarian organization fighting global poverty by empowering women because they have the unique power to help entire communities escape poverty. “Sheila’s I Am Powerful Challenge” was instrumental in helping raise funds for CARE’s important work. She served as a member of Accordia Global Health Foundation’s International Council, rallying support for the foundation’s efforts to overcome the burden of infectious diseases in Africa.

A fervent supporter of education, the Sheila C. Johnson Fellowship at the Harvard Kennedy School supported a cohort of 50 fellows – emerging leaders dedicated to improving the lives of the underserved. As a board member of the Jackie Robinson Foundation, she created the Rachel Robinson International Fellowship program – providing the scholars the opportunity for international service and study abroad. Ms. Johnson endowed two chairs at her alma mater, the University of Illinois – School of Music. At the University of Virginia, the Sheila
C. Johnson Center for Human Services was established to provide evaluation and treatment in various specialties of childhood development.